I had a day at the Nuclear Bunker today, and was having a bit of a tidy up in the teleprinter room.

I opened a very dusty cupboard, and look what I found

it looks to be a line current version, perhaps over the weekend I will clean all the dirt from the machine, and then delve into the electronics to see if it can have a short play on I-Telex.

IMG_20200529_142147_707.jpg
I think it might be ex Reuters - there are a couple more Transtel machines at the bunker (they all really do not belong there, but the owner will not dispose of them)

Well, it had to come in from the camper van, so seeing as the Station Commander has an intense dislike for Teleprinters, it had to have a little clean up just to make it house friendly (no room in the workshop

Its really got a home made feel.

Almost a cross between a Trabant and a British Sports car 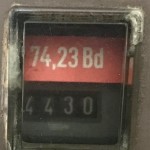 It is slowed down by the Trabbi/RFT color.

Well, I have taken a look under the bonnet, it's not great news. The previous owner has been inside the machine and made some hefty modifications.

It should have been a smart dark grey. The keyboard is correct for the machine.